A puzzling picture was presented to the kids when they arrived at dialogue. Some saw an elderly woman, while others found a young woman’s face. After some discussion and lots of explaining, most people were able to see both, but then had the confusing experience of switching back and forth. As a whole group the kids talked about how oftentimes we only see things from one perspective, but if we’re open to looking, we can see something completely different. This talk led into a game. A rope was laid down the middle of the room and the kids were split into two groups. Each group was separately given the same objective: to get all the members of the other group to their side of the rope. Language was intentionally left neutral, winning/losing, your team/their team, etc. was never mentioned.

Kids used different strategies to try and accomplish what they were told to do. Some thought of a good solution but didn’t know how to involve others. Some tried to create a really attractive environment with fun games on their side, so kids from the other side would be excited to join them. Others pleaded, begged, bribed or tried coercing the other kids across. Some tried negotiation and explaining. After about 20 minutes, they all came to the agreement to stand on the centerline, with one foot on each side.

In the debrief, kids reflected on the experience. Alexxa, a Christian camper from the US, noted that: “People are thinking about just their goal, without thinking about both groups”. Joseph, a Christian, Jerusalem camper had a related thought: “Nobody thinks about the middle ground”.

Most kids realized that they had been thinking in terms of winning and losing, and assuming that the first side with all the people would win. When asked to explain the purpose of the game, many of them all had good ideas. One said it was to “learn listening” another mentioned “empathy” another wanted to emphasize “seeing things from different perspectives” and another talked about “working together”. They were able see how all these skills fit together to in order to cooperate.

After working hard in dialogue, the kids once again went off to practice and develop their Abraham tent skits. 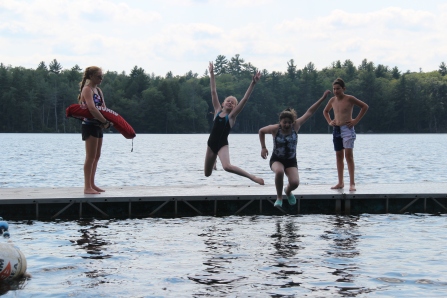 Down at the waterfront, after lunch, pairs of kids swam around, jumped off the dock, chatted, laughed and splashed. The same afternoon rotations of mask making, sports and games/acro-yoga took place before dinner. At that meal, the much anticipated clean cabin award was presented. Spaces were judged on their cleanliness, as well as the feel and how welcoming they were. One of boys’ cabins had cleaned everything, even the porch, and was thrilled to take home the prize!

The evening was relaxing, watching a movie, Remember the Titans, and drawing backdrops for the Abraham tent play. Cleaning up spilled popcorn after the movie, kids worked together, pausing on the way back to their cabin to admire the stars.

Be the first to start the conversation!